SIMulation of tools / tissues interactions for the PLanning of Endovascular devices implantation.

Among mini-invasive surgical techniques, endovascular treatment consists in accessing the lesion through intravascular way to interact with pathological tissues [1].  These techniques have developed in recent years to become the reference therapy for several pathologies (aneurysm, stenosis …) [2]. However,  the  introduction  of  delivery  tools  through  arteries  and  the  deployment  of  implantable devices can have major consequences due to interactions between endovascular devices and tissues. Nowadays, the anticipation of complications mainly relies on the surgeon’s experience. Because of the regular  development  of  more  and  more  complex  endovascular  devices,  the  practitioners  face difficulties to anticipate treatment outcome and to gain experience. To improve the planning of the treatment and optimize the interventional strategy, there is a need for new decision support tools compatible with the clinical workflow. Software tools for planning endovascular treatment already exist but mainly focus on pre-operative imaging. Beyond preoperative image analysis, explicit modelling of endovascular devices and of their interactions with tissues could be used to propose an augmented decision process by predicting possible complications [3].

Several studies about modelling and numerical simulation have been reported in the context of cardiovascular diseases. However, issues related to patient-specific simulation for endovascular treatment planning have been little addressed so far. The prediction of the mechanical equilibrium between the vascular structure and endovascular device from preoperative patient data remains a challenge.

To develop patient- specific and predictive simulation, the proposed approach is based on the joint exploitation of patient image data and biomechanical models. Intended work more specifically deals with the simulation of delivery tools insertion, vascular deformations, prosthesis and stent deployment, and active catheterization.

SIMPLE project is carried out in strong interaction with clinicians integrated in the team. First results have been obtained in the context of endovascular abdominal aneurysm repair.  Ongoing work is extending to other endovascular applications in surgery, interventional cardiology and radiology.

The finite element (FE) method developed by [4] showed efficacy in predicting vascular deformation in the context of endovascular aortic aneurysm repair. However, its computational cost is a limitation to its integration into the clinical workflow. To reduce significantly the computational cost, a reduced order model (ROM) is being developed at LTSI in collaboration with ANSYS and Therenva companies. The approach consists in applying machine learning techniques to reference FEM simulation results obtained from several hundred of cases. 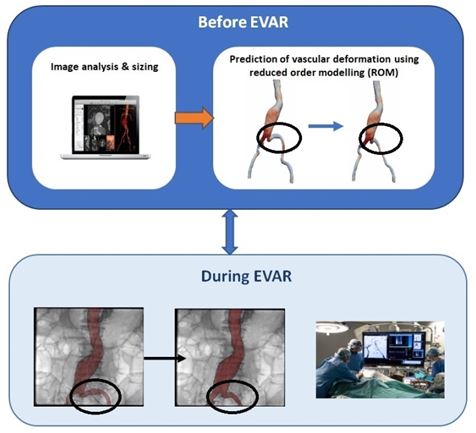 The first results show that the reduced order model could be used to estimate the vascular deformation due to the insertion of a stiff guidewire in a few seconds and can be more easily integrated into the clinical workflow. Further ssessments are underway.

A numerical method has been developed to simulate stent-graft deployment in abdominal aortic aneurysm considering the vascular deformation due to the insertion of the delivery tools. First results were presented at SURGETICA’2017 conference [6].

Starting from preliminary results obtained in collaboration with ANSYS and other academic teams (LaMCos, Lyon; CIS, Saint Etienne) [5] [7], experiments were conducted at LTSI to adapt FE method developed for EVAR to simulate the guidewire insertion during TAVI, assuming deformable vascular structures. Work has also been initiated to address the problem of patient-specific simulation of device – tissue interactions in transluminal angioplasty (balloon, stent), where the prediction of calcified plaque behaviour remains a challenging issue.

In order to extend simulation based decision support to active catheterization recently proposed by ISIR and Basecamp Vascular start-up, issues related to the analysis of intra-operative observations are also being addressed by ISIR. The objective is to estimate the pose and to characterize the behaviour of this new kind of devices from fluoroscopic images, more specifically when accessing supra aortic trunks. The work planned at TIMC deals with the development of an experimental bench, integrating fluids flow dynamics, compatible with intra-operative X-ray rotational imaging. The evaluation and the study of the influence of the blood flow on catheter navigation are then possible. This will allow analysing the validity of different hypotheses eligible for catheterization simulation.

[3] Kaldji A., Daoudal A., Gindre J., Lalys F., Cardon A., Haigron P., Lucas A. Numeric  simulation  predicts iliac complications during the implantation of an aortic stentgraft. Annals of Vascular Surgery 2017 ; 44:2.

[5] Gindre J., Bel-Brunon A., Rochette M., Lucas A., A. Kaladji, Haigron P. and Combescure A. Patient-specific finite element simulation of the insertion of guidewire during an EVAR procedure: Guidewire position and curvature prediction validation on 28 cases. IEEE Trans Biomed Eng. 2017 ; 64(5) :1057-1066.